After the previous day's freeze, the weather was glorious - mostly sunny and in the 30s.  The group donned traction devices and set off for the woods. Along the way, we saw the site of the Dover Union Iron Mill (http://archive.boston.com/ae/books/articles/2003/12/21/old_mill_gets_new_attention_from_author/) and its attendant ponds, which on this day had a lovely ice fall.  Despite some efforts at persuasion, Robin declined to demonstrate her ice climbing technique on site.  The rest of the hike proceeded to the sawmill pond, then to Strawberry Hill in Hale Reservation, before returning to the ponds and climbing up to Noanet Peak for views of the Boston skyline (hidden behind all the people in the group photo) and Robin's delicious oreo treats.  By popular request, here's the route we hiked:  https://www.alltrails.com/explore/map/map-january-12-2022-2-15-pm-87ae6fb .
Everett asked about the meaning of the name Noanet.  Although I could not answer the question at the time, a little googling provides the following:  "Noanet was likely the name of a leader of a group of Indigenous Peoples probably affiliated with the Nipmuc and Wampanoag, who camped on this land, fished the Charles River, and hunted along Noanet Brook."  More information on the reservation can be found here:  https://thetrustees.org/content/noanet-history/ .
Report by Dmitry Gorenburg. 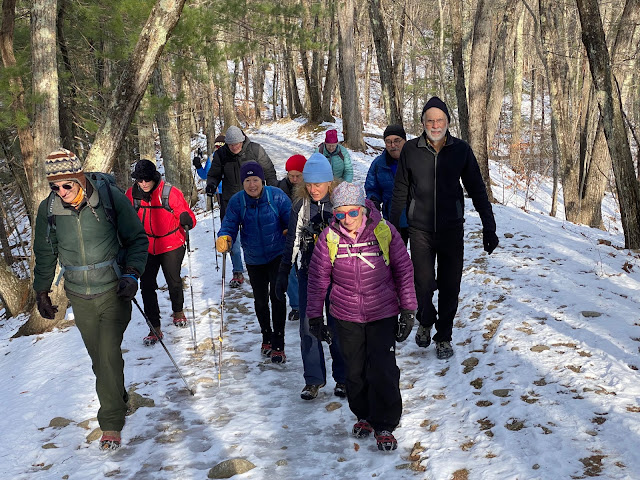 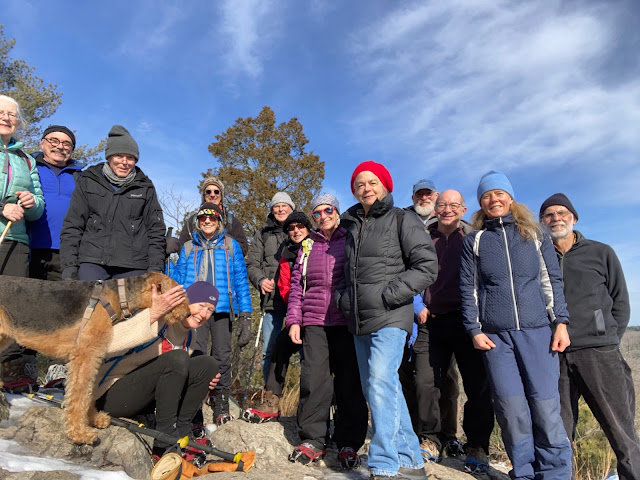 Posted by Charles River Wheelers at 5:14 AM No comments:

Wednesday, 29 December 2021, Walk the Wilds of Wellesley I

The day turned out to be a surprise for many.  For one thing, the weather was gray and cool - one said “ brisk,” but it was perfect walking weather.  For a second, many were very pleasantly surprised by the extensive and interesting trails in Wellesley, which explains the title of the hike:  Wilds of Wellesley I.  (Stay tuned for #s II & III.)  Finally, this was Don’s first time as a co-leader and he was surprised that people actually followed him!

One thing was not a surprise:  as always, the WWs who showed up were very congenial and very pleasant to be with.  The group stayed together all the way, giving sweep, Joey Castro, little to sweep. 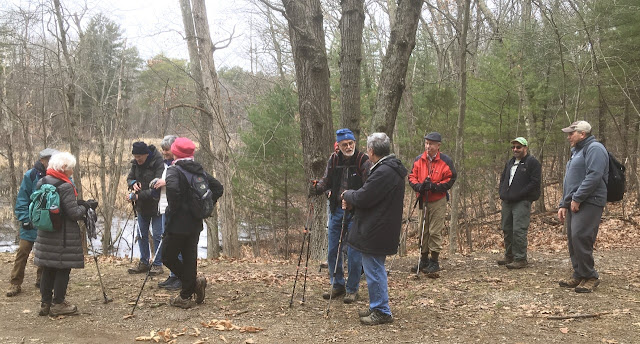 Posted by Charles River Wheelers at 2:25 PM No comments:

Seventeen hikers and three canines met at Red Rail Farm in Lincoln.  The mention of a bicycle race track in the ride announcement caught the attention of Larry Finison, a bicycle historian, who showed up at the ride start for a brief chat.

The hikers set out through the woods along the many ups and downs of the kettle holes left behind by glacial activity.  At the Velodrome we gave a brief talk about the history of the fairgrounds (see below), before we walked around the perimeter of the track.  We then worked our way over to a route along the Sudbury River and Fairhaven Bay which offered great views of the water, as well as a large stone chimney and stone boathouse.  From there it was back into the woods towards Walden Pond, then back to our cars.

The crisp temps and bright skies made for a great day of hiking, and we set a new WW record for dogs, both in numbers and in decibels.

Information on the racetrack fairgrounds:

The bicycle race track was part of the fairgrounds from the late 1800s. The track is about 500 feet in circumference and has a pronounced bank on one end. In its heyday, the fairground included a dance hall, restaurant, baseball field, a race track, and amusements. On weekends, people flocked by the thousands to “Lake Walden” on the Fitchburg train line to go boating, swimming, and to use the fairgrounds. The fairgrounds were built by the owners of the railroad to encourage ridership. There were several fires over the years, likely due to sparks from the steam locomotives, so in the early 1900s it ceased to exist. Today, the only visible remains are the race track and cleared ground between the trees.

Information on Wright woods where we hiked 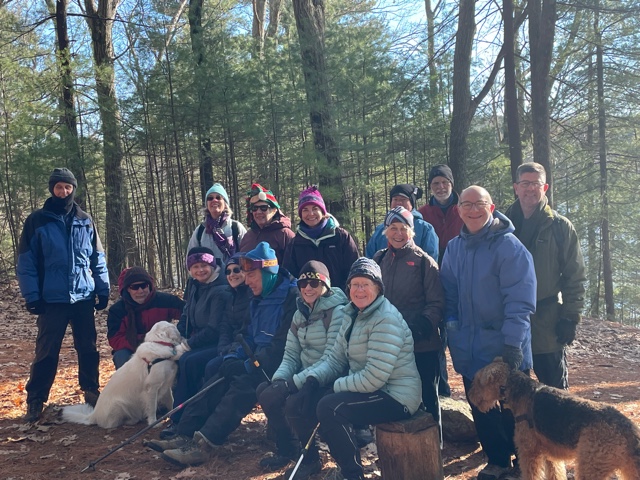 Posted by Charles River Wheelers at 5:14 AM No comments:

The sixth annual Walden Pond Hike was well-attended, with twenty hikers.  We had a comfortably cool day with some sun and little wind.  The beaver pond at Heywood’s Meadow didn’t disappoint.  We observed lots of recent beaver activity and two impressive lodges.  When we came out of the woods for our first glimpse of Walden Pond, it was a glimmer-glass, reflecting the tree-lined bank for 360°.  It was beautiful.   We visited Thoreau’s cabin site, and then proceeded to an area where Thoreau farmed beans and where his cabin was moved after he no longer lived in it.  The cellar hole is still visible.

After a brief stop at the Walden Pond Visitor Center, where many of us got a souvenir tree “cookie:, three people decided to take a short cut to their cars.  The rest of us made our way to the top of Pine Hill and admired the distant view of Mt. Wachusett, which was visible through a gap in the trees.  We made it safely back to the parking lot and Janet delighted everyone with her homemade mince pies and Robin gave out German chocolates.  Fueled by those delicious treats, fifteen of us made our way to Verrill Farm for a loverly, long lunch in the greenhouse. 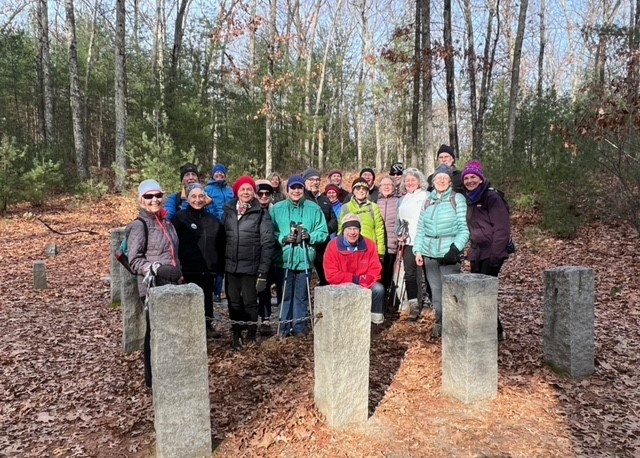 Posted by Charles River Wheelers at 5:29 AM No comments:

Wednesday, 8 December 2021, Hike along Farrar Pond
Hike Leader:  Marie Keutmann, assisted by Zoe
~4 miles, 10:30 am start from Lincoln, MA
Hikers (18 humans, 1 dog):  Marie, Zoe, Barbara Jacobs, Betsy Harper, Butch Pemstein, Dan Nelson, David Wean, Gene Ho, Janet Miller, Joanne Samuels, John Nilsson, Marlene Heroux, Patrick Ward, Richard Fortier, Richard Vignoni, Susan Broome, Susan Sabin, Ted Nyder, and first-timer Zach Woods.
Present at end of lunch:  Helen Greitzer.
In a normal year, pre-COVID, we would have had a ride, a hike, and then a Hanukkah Party afterward at our house, with typically fifty people coming to the party.  This year, we decided to forgo the party, have lunch at Verrill Farm after the hike, and not risk having fifty people in close quarters in the house.
The hikers and Zoe (labrador retriever) set out from Marie and Richard's house to hike along Farrar Pond.  We had some very nice views of the pond and took the boardwalk, created by beavers, over the marsh at the far end of the pond.  We looped back through a large open field and back into the woods to return to the start.  There was a lot of socializing on the trail, since it is easier to talk on a hike than on bikes.  Lunch after the hike at Verrill Farm was a delight, since we had the tables in the greenhouse to ourselves and there was plenty of room for fourteen of us.  Helen joined us late at Verrill while there were still a handful of us there.
Report by Marie Keutmann.
Posted by Charles River Wheelers at 4:39 AM No comments:

On Wednesday morning I had six signups, one bailed, and Frank joined later.  At post time, I had one MIA, which is way better than two last week, and five actual riders vs one last week.  So things were improving, but, looking at the group, I could see trouble ahead.  I knew that most, or all, of them were faster than I, and making them ride at my snail's pace wasn't going to work out too well.

So I came up with plan B.  Beth had volunteered to be an advance arrow, so I would sweep instead.  This was, as they say on Survivor, a "game changer."  So I made sure that everyone had the route on their GPS device so that, come what may, no one would get lost.  This turned out to be a good decision, since right out of the gate, going up the hill on South Road, I was off the back.  Caught back up at the traffic light, but was immediately dropped on the next hill.  Everyone played nicely though, waiting for me as required.

So the nominal leader was relegated to sweep, and everyone took care of themselves.  This actually worked pretty well, arrows appeared where needed, Beth doing most of the work in that regard.

As advertised, we passed roads named for all four points of the compass, North, South, East and West.  We even threw in East Riding Road and South Chelmsford Road for good measure.  Towns in Massachusetts aren't very original in naming their roads, so this wasn't hard.  The other favorite is naming the road for the next town over.  So if you're on "Concord Road" you can be pretty sure you're not in Concord, but will be soon.

For me, the ride was a trip down memory lane, since it went on roads I used to ride commuting first in Westford, then down Rte 110 a bit in Littleton.  We went on Robin Hill Road, famous as the former abode of Pamela and John.  "Hill" in the road name is very appropriate for them.

We also rode the Bruce Freeman rail trail for a bit.  We didn't see a single other person on the path, though we weren't on it for long.

So, a good time was had by all, even though we didn't strictly follow the Wednesday Wheeler protocol. 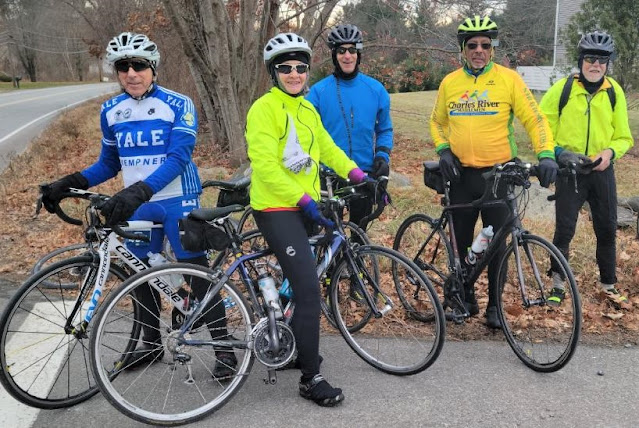 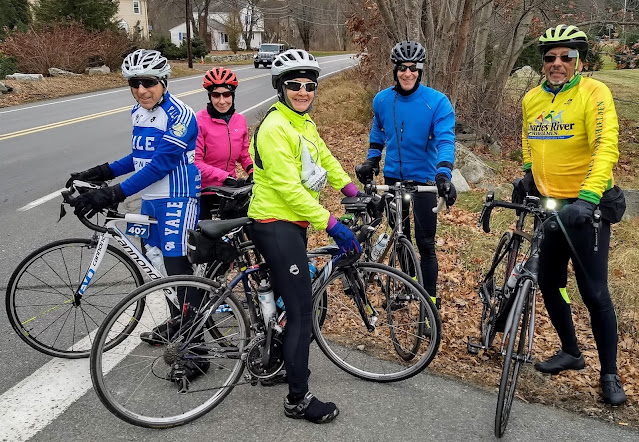 Posted by Charles River Wheelers at 5:08 AM No comments:

This was almost "the Ride that Wasn't." My rider list that came out on Tuesday contained one rider besides me. Early Wednesday morning, said rider bailed. Was looking pretty lonely, until I checked the rides calendar, and two more riders had registered, plus a third who was having trouble with the signup. Wahoo! - beginning to look like a crowd. The throng dwindled as one emailed me that he wasn't coming. and two never showed by post time. This raises the philosophical question "What if you gave a ride and nobody came?" Is it still a ride? Fortunately, I didn't have to ponder this for very long as Wing showed up nearly on time.

(Note: I'm not really a zero tolerance about start time kind of guy, but my tolerance tends toward miniscule as the temperature drops. Good rule of thumb: wait x minutes beyond published start time (where x is temperature in degrees Celsius).

So Wing was appointed de facto sweep and the arrowing was flawless, which is to say non-existent. It was pretty cold and windy at the start and the first half of the ride was mainly into the wind. Wing took the lead now and again, hence the shared billing above.

We did not have a Wisteria Lane sighting as advertised. I was beginning to think I had imagined it, but thanks to Google, I found it off of Byam Road just around mile 16. OK, it's "Wisteria Road" not "Wisteria Lane," but close enough.

I wasn't able to manage the standard 13 mph pace, much less the "spirited" one, so I'm in jeopardy of being fired from WW leadership. We didn't stop anywhere and the group photo was a group selfie at the end.
Report by Jack Donohue. 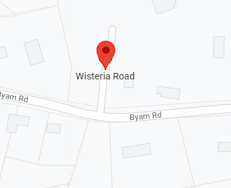 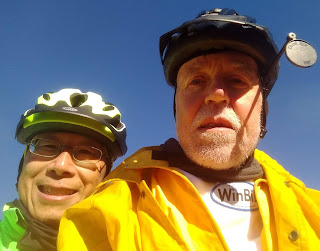 Posted by Charles River Wheelers at 11:58 AM No comments: