Twenty-two years ago (1998) I created a ride that I named "Bridges of the Sudbury River."  After several seasons of my leading this ride for the Wednesday Wheelers, and as a CRW weekend ride,  Rich Taylor took over the leadership and has added both longer  and shorter route options.  Then, with the advent of  Ride With GPS (RWGPS), Rich posted his three ride options to RWGPS.  Jerry Skurla has since added another branch to the tree - his "Three Rivers, Twelve Bridges" ride includes my original eight Sudbury River crossings and adds two crossings each of the Concord and Assabet Rivers.  His ride also adds the delightful, new extension of the Bruce Freeman Rail Trail.  Jerry has posted his ride on RWGPS.

Regrettably, and on very short notice, Jerry was unable to lead his ride this past Wednesday.  At 5:59 pm on Tuesday, Helen accepted my offer to be the substitute leader.  With only sixteen hours (including sleep time) to prepare, I studied Jerry's new route and decided I would do my best to lead his intended route, rather than substitute an alternate ride that was more familiar to me.  I was aware that it was going to be a challenge to lead from a printed cue sheet (downloaded from RWGPS), as I do not yet have an on-bike RWGPS system worked out.

It was a lovely, sunny day for the ride, with dry roads and not too cold or windy, bringing out twenty WWs for the start at Crosby's Market in Concord.  Rich Taylor volunteered to be co-leader and Butch Pemstein volunteered as sweep.  I admitted to the group that I felt like a substitute teacher who, on very short notice, agrees to fill in despite having little time to study the intended lesson plan.  Rich agreed to stay right behind me and be the one to call for and designate a human arrow for each turn.  That freed me up to concentrate on my clipped-on paper cue sheet, which was happily flapping in the breeze.  I had planned a rest stop for halfway into the ride at the Longfellow Health Club in Wayland, which would be a short-distance diversion from Jerry's route.  When we regrouped at the foot of Goodman's Hill (at mile 15.4), the majority of the group wanted to skip the rest stop.  So, we split the group - Rich led the larger group, while I led the smaller number to the planned rest stop, after which we resumed riding the route.

Thank you to Rich for co-leading, to Butch for sweeping, to and all who volunteered to be arrows or help in other ways.  And thanks to all who refrained from giving a hard time to the "substitute teacher!"

At the base of Goodman's Hill Road, a group of twelve riders decided to bypass the rest stop and carry on.  Rich "led from the back" of the group to be sure no one got dropped.  The folks in the lead had the route on GPS or were familiar with the original route. We rode in a group of seven and five riders, keeping everyone in view so that arrows were not deployed.  A couple of traffic lights assured that we stayed together.  There was a bit of a split climbing Garfield Road after Bridge 11, but the speedy downhill got us together for the final two miles across Rte 2 and past Daniel Chester French's house (sculptor of the statue of Abraham Lincoln in the Lincoln Memorial in DC).

Everyone had a smile at ride's end - good route - good friends. Thanks, Jerry, for a new adventure and thanks, Bill, for volunteering to lead on such short notice.

Posted by Charles River Wheelers at 11:40 AM No comments:


Sixteen hardy WWs met at the Oxbow National Wildlife Refuge in Still River, a village in the Town of Harvard.  With little sign of the predicted 70 mph gusts, we started off on a trail, along the east bank of the Nashua River, that was originally an Indian trail but became the road between settlements in Groton and Lancaster around 1650.  At 0.8 miles we turned away from the river onto the old Union Turnpike which was constructed through the Oxbow swamp in 1805, when Thomas Jefferson was president.  We passed plenty of fresh beaver-cut saplings as we made our way east.

After crossing the railroad tracks that run from Worcester to Ayer, we hiked up the hillside through Fruitlands property, still following the Union Turnpike.  After a brief stop to admire the site of Clara Endicott Sears' Pergola mansion, we headed north to the entrance to the Community Harvest Project, located amidst hibernating apple orchards on a couple of hundred acres on the east side of Prospect Hill Road.  After requesting and receiving permission, to cross the property, from the farm manager, we walked east on a farm road and climbed Dean's Hill, where we admired the view of Bare Hill Pond in the distance and took a group photo.

Then it was down Dean's Hill, up Madigan Lane (part of the Union Turnpike in the day), down the Fruitland's property to the west, and finally back to our cars.

About ten of us then met at the Harvard General Store for lunch, which turned into a bit of a fiasco when the kitchen took more than a half hour to prepare the simple lunches we had ordered.  They said their ordering system had broken down, but that seemed a flimsy excuse to some of us.  In the end, they apologized and gave us several coupons for free sandwiches at our next visit.  Next time we'll order ahead. 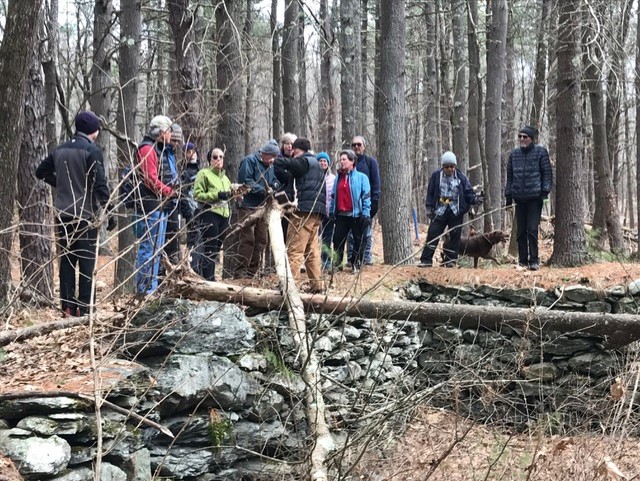 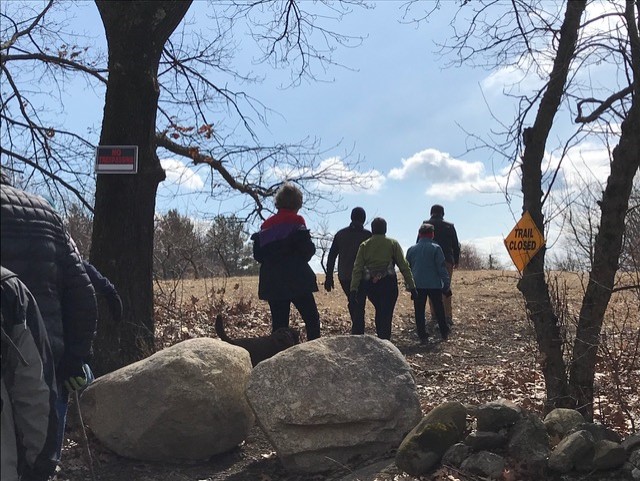 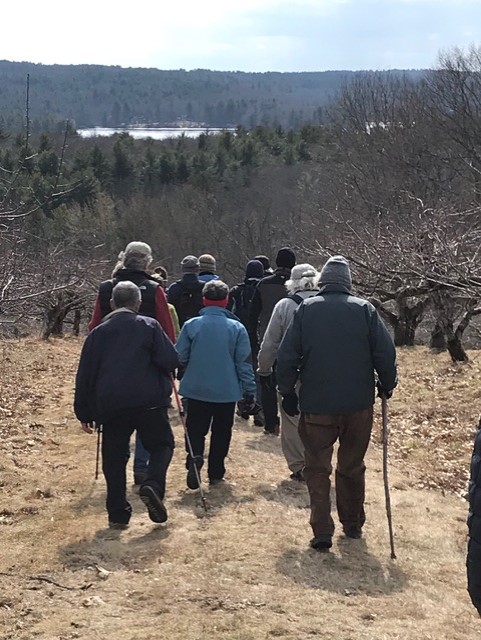 Posted by Charles River Wheelers at 5:02 AM No comments:

The waters parted between 8 am and 2 pm and we were able to complete a circuit of Rocky Woods Reservation.  It was overcast, but the temperature was ideal.  Trails were clear and we made good time, ending the trip with a climb up Cedar Hill.

Luncheon stop was at Blue Moon Cafe for lentil soup and vegetarian combinations.  Hikers had not realized that it was not just a bagel shop, but a first rate restaurant with varied cuisine. 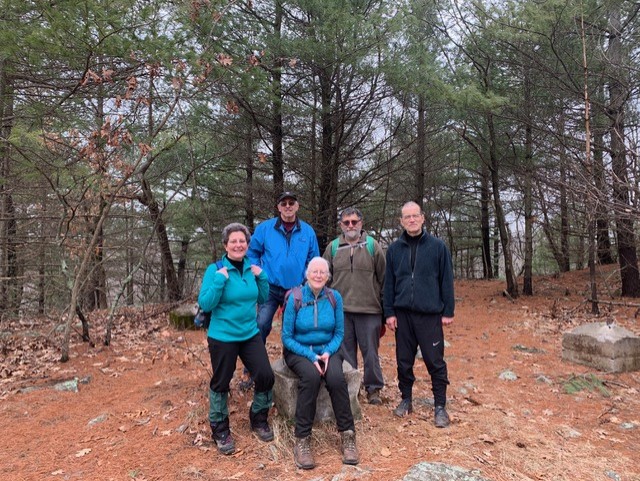 Posted by Charles River Wheelers at 4:54 AM No comments:

Twenty-three WWs met their leaders in the wet and muddy Food Project parking lot ready for our hike.  We took the trail that starts at the bottom of Baker Bridge Road to walk towards Heywood's Meadow - no longer a meadow, thanks to the activity of the beavers there.  The beavers would like to make the pond even bigger, but are kept in check by a Beaver Solutions pond leveler installation, to prevent a flood and associated damage to the Fitchburg railroad tracks.  We saw no beavers, but did see a muskrat dive into the pond and under the ice.  As we walked around Heywood's Meadow, we observed lots of fresh beaver activity, with some sizable trees having been felled.

We hiked on to Walden Pond and visited the site of Thoreau’s cabin, before continuing around the pond.  Judith described how this very large kettle pond was created by the retreating glaciers.  Greg Stathis told us that the Commonwealth authorities had poisoned the pond with rotenone in 1968 and then restocked the water with “more desirable fish” for anglers.

We stopped briefly at the Visitor Center, where an enthusiastic ranger told us much more about Walden Pond.  Then we headed up Pine Hill, home to a large underground water tank and a view of Mt Wachusett.  After leaving Pine Hill, we caught sight of the building that houses the Walden Woods project, which is devoted to the legacy of Thoreau.

After the hike most of us gathered at Verrill Farm, where we ate in the warm sunshine of the greenhouse.

Posted by Charles River Wheelers at 4:05 AM No comments:

Harriet and I did the Balance trails, our favorite, three times, as well as 37 other runs before lunch!!  Terrain park, bumps, jumps, race course.  Really!  The Balances, anyway.

Posted by Charles River Wheelers at 5:40 AM No comments:

The sky was gray but the temperature hovered around 40 degrees -   decent riding weather for this time of year.  Harriet and I expected a large turnout, but only ten showed up, perhaps because the roads were
damp, with puddles here and there.  The downside of these road conditions was the post-ride need to wash one's jacket and bicycle, for those who didn't have fenders.  Harriet was nominally the leader and arrows were posted at some turns, though the group mostly stayed together and several people alternated taking the lead.  I swept, often fell behind, and caught up at regrouping points.  John Springfield, recovering from bronchitis, left the ride and returned to Burchard Park after a few miles.

Harriet organized the ride in memory of her husband, Sheldon Brown, who died twelve years ago.  She and I maintain and expand his bicycle repair and maintenance website, https://sheldonbrown.com.

At the ride start, Harriet and I told how we met Sheldon:  she - on a CRW ride, and I - when he stayed after closing time to repair a flat tire for me at the bike shop where he worked.  The ride, contributed to CRW by Barry Nelson, featured Water Row, one of Sheldon's favorites - and one of ours, too - 1.25 miles bordering, for the most part, the Great Meadows National Wildlife Refuge.  The ride continued on (mostly) quiet roads, with a rest stop at Starbucks on Thoreau Street in Concord.  We passed Walden Pond, though we did not stop for a swim, and then deviated from Barry's route to take the new segment of rail trail from Wayland to Weston - a pleasant, early-season thirty miles.  The group dispersed, as only one participant wanted to stay for lunch after the ride.

Posted by Charles River Wheelers at 4:37 AM No comments:

It felt like an early spring day, with temperatures in the high 30s and clear skies.

We paused a few times in our meandering to take in some peaceful views of the river and bay.  Around the mid-point of our hike, we came across Everett who was travelling in the opposite direction - he quickly reversed direction to join us.

Some good exercise was provided by a small hill where, at the top, we marveled at how some of the .1 percenters live with such luxuries as a private, secluded outdoor ice skating rink with sound and light systems.

Most hikers went to Verrill Farm to have lunch in the greenhouse.

Report by Jack Mroczkowski.
Posted by Charles River Wheelers at 3:58 AM No comments: